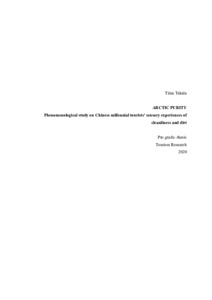 The number of Chinese tourists visiting Lapland has tripled over the past few years and the Chinese millennials are seen as the key driver of Chinese outbound tourism in the future. Due to the growing urbanisation and industrialisation, clean environment is believed to be a big attraction among Chinese tourists.

The empirical material consists of nine semi-structured interviews, collected from 16 Chinese millennial tourists in Rovaniemi, Finnish Lapland. The interviews were conducted in English and collected outdoors in winter 2017 by using the method of sensewalking, introduced in the 1960’s by Southworth. The empirical material was analysed using the process of hermeneutic circle. The study was conducted following the ethical principles and guidelines of the Finnish Advisory Board on Research Integrity.

The results of this study suggest that dirt is viewed to be related to urban environments and caused mainly by humans and crowding. Though the presence of wild animals was seen as a sign of cleanliness, except for their secretions. Cleanliness of the environment was seen to manifest itself through silence, smells of nature and difficulty to access. Also white snow was considered clean, while all the other colours of snow were perceived as dirty. Both polar regions of the world were seen as clean places. The importance of clean environment as a reason for travelling was believed to increase in the future. The results of this study can be utilized in further research of the topic and be applied to tourism marketing and development of tourism destinations.