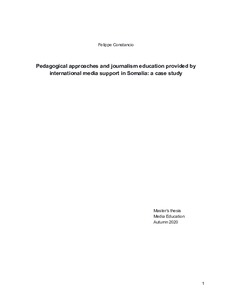 International media organizations to support journalism education in Somalia have been participating actively in the reconstruction of the local media landscape followed by the withdrawal of Al-Shabaab troops in 2011. Although regular since then, the presence of international support has been changing along with the years, with different organizations coming and going, attempting to bring their respective approaches following the dynamics of the local development. The programmes for journalism training provided by the Finnish organization Vikes comprise this case study due to their distinctive feature in comparison with its homologous organizations that have been or are currently running educational projects in Somalia, given Vikes's participatory and peer-learning methods. The present research investigated Vikes's educational approaches and the purposes behind the organization’s training programmes from their inception, in 2014, until the first quarter of 2020. The theoretical framework of the study considered prominent conceptions of the Freirean Critical Pedagogy to observe the role of the facilitators, also called trainers, as well as Vikes's proposals for journalism education in collaboration with its Somali local partners, such as the national broadcasting channel SNTV and journalists’ unions. The data collected from a series of classified and issued documents in parallel to nine one-to-one interviews with Vikes's facilitators and insiders were analysed by the means of a mixed technique of descriptive narrative. The data analysis intended to achieve an in-depth understanding of the logic and functions behind the training programmes. Meanwhile, the discussion of the research focused on the characteristics related to how and what was taught within Vikes's educational project in the context of the period framed.