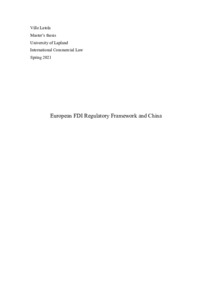 With little doubt, the 21st century will be remembered mainly for the role China plays in it. Decades of unprecedented economic growth has been an endless source of workers and later customers for investors all across the world. China is currently the second-largest economy in the world and has increasingly begun investing overseas itself. However, China is a single-party state, with a large state-owned sector dominating large parts of the economy. This has caused concern in the European Union about the influence China might gain through investing in European countries. Furthermore, China has been very protective of its domestic industries, which is seen as an unfair advantage for Chinese companies over their European competitors. This study focuses on the challenges that EU FDI regulation faces because of China.
The European FDI regulation has been created in a fundamentally different world, where all major investors are similar, free market based liberal democracies with rule of law. The emergence of a fundamentally different system on a massive scale, like China upsets this premise and forces strategic considerations to be taken into account when regulating FDIs. China is both a blessing and a curse for the EU. The Chinese markets are vital for European industry but at the same time, the EU fears China´s growing influence over its member states and of being taken advantage of by the comparably free access given to Chinese investors into the EU markets and the lack of transparency in Chinese investment activities.