INDIA AND THE ARCTIC: Analysing the International Treaty Law framework applicable in the Arctic and ascertaining India’s State Practice 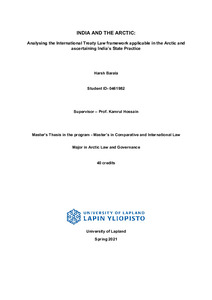 India’s involvement in the Arctic has been gaining momentum for the past decade and a half. When India became the Observer of the Arctic Council, it was seen as the formalization of India’s engagement with the Arctic and its policy shaping body. India’s interaction with the Arctic has been studied from the lenses of Strategic affairs, economic and scientific interests but a study from the lens of International Law has not been widely documented yet. This paper documents the past, present and the future of India’s interaction with the Arctic in context of International Law and Policy issues prevalent in the Arctic. This study shall be performed by analysing the existing International Law framework operating in the Arctic and issues therein from India’s perspective. Such a study is necessary to remove past inconsistencies present among official Indian policy statements and views of Indian authors and the aim of this paper is to ascertain India’s state practice in the issues of international law affecting Arctic law and Policy and set up the grist vis-a-vis International Law for its white paper on the Arctic which is consistent with its state practice. This paper also attempts to assess the risks the Arctic possesses particularly for India and what should India’s Arctic navigation path look like.