Moral Inquiry into Nordic Animal Work in Tourism: The Role of Emotions and Reasoning 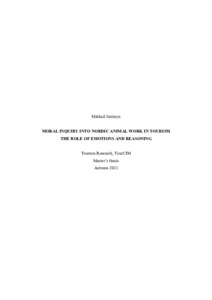 Human-nonhuman animal relationship in tourism reveals a dichotomy between tourism prosperity and ethical concerns. For long nonhuman animals have been involved in different forms of tourism activities with functions ranging from entertainment and profit generation to marketing and education. At the same time, recent talks of animal rights and welfare call to ponder on the moral aspects of nonhuman animal involvement. The currently accelerating wave of social awareness of anthropogenic impacts on our globe’s ecosystems only further pushes both researchers and society to reassess human-nonhuman animal relationship within tourism.

Within the field of tourism studies, human-nonhuman animal relationship has been predominantly researched from normative ethics perspectives and viewed either through the context of animal captivity or tourist-animal relationship, with little research taking the worker-animal relationship perspective. Theoretically, this study draws upon the normative discourse of academic literature and major animal ethics theories, joining a critical paradigm which highlights the need to shift the research focus away from justification or application of absolute normative principles towards the inquiry of morally problematic situations. It suggests a turn from a monistic viewpoint towards more intersubjective-interpretive approach.

This study aims to explore how cognitive and emotional attributes of animal workers in Northern Europe facilitate moral deliberations of the use of nonhuman animals in tourism. After conducting participatory and non-participatory observations during winter period of 2019-2020, the empirical data was collected through semi-structured in-depth interviews with 6 tourism animal workers in Finnish Lapland in the winter period of 2020-2021. The data was then analysed through the qualitative interpretive content analysis to facilitate the exploratory disposition of the study.

The empirical data of the study indicates that emotional motivations and emotional relationship with nonhuman animals facilitate moral positioning of nonhuman animal labour. At the same time, tourism animal workers utilize certain emotional management mechanisms to cope with the difficulties and specifics of the job. Overall, the results of the study on the theoretical level suggest reflective equilibrium as an approach to achieve an endpoint of moral inquiry.