Towards Multiliteracy: A Focus on Non-Western Culture for Re-examining the Scope of Media Education 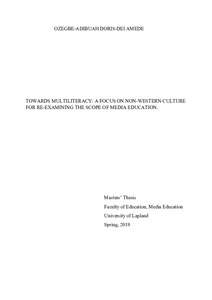 The concept of Multiliteracies is one that has attracted a lot of attention in recent years and deservedly so. Since the report of the New London group on the Pedagogy of Multiliteracies, Scholars and educators all around the world have sought to understand its framework and implications especially as it provides valid discourses in relation to the needs of Education in the 21st century and in our increasingly multi-cultural societies. Meanwhile there is some level of unclarity regarding the difference between Media literacy and Multiliteracy both of which are important projects of Media education.

Media education today however seems preoccupied with digital media technologies and the vibrant world of social media to the exclusion of other less popular forms of media. Paradoxically, the spirit of Multiliteracy which Media education is poised to promote advocates the democratization of meaning making in all its forms: Linguistic, Visual, Audio, Gestural, Spatial and Multimodal.

Non-western culture laden with these forms of meaning making is left behind, along with its potential to enrich and enlarge the scope of Media education.

This study is an attempt to open the pandora’s box of Non-western culture, through the lenses of Multiliteracy as prescribed by the New London group and in the process to seek clearer understandings of the overlapping concepts of Media Literacy and Multiliteracy as they relate to Media education. The study conducted against the backdrop of Vygotsky’s socio-cultural theory uses conceptual analysis methods to detect the existence of multiliteracies in Non-western (Igbo) culture as depicted in Chinua Achebe’s “Things Fall Apart”.