Protection of the sacred lands and culture of the Wixárika people : domestic and international legal perspective 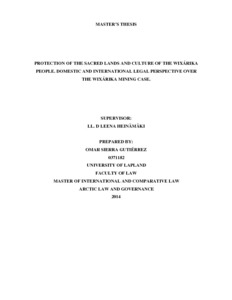 During the last three decades the integral approach between human rights and environment has benefited world´s indigenous peoples´ role within the decision-making process at state level and international law. The evolution and development of international law towards legal personality of indigenous peoples has reinforced and reassured the awareness that for their cultural and environmental protection, their participation at all stages of the decision-making processes regarding their traditional lands and resources is mandatory.

The mentioned before can be noted by analyzing the existent connections between the background, objectives and means of implementation, particularly, among the UN Human Rights Committee, International Covenant on Civil and Political Rights, the ILO Convention No. 169, the Rio Summit follow-up activities, the American Convention on Human Rights, the Inter-American Commission and the Inter-American Court of Human Rights and the United Nations Declaration on the Rights of Indigenous Peoples. In the pursuit of the protection of its cultural heritage and biodiversity, Mexico has shown its compromise by amending its legal framework and ratifying said international human rights standards to protect these places and people that might be compromised by human activities. Nevertheless, also during the last thirty years the cultural integrity of a particular Mexican indigenous people – the Wixárika people - and the environmental protection of the area that contains its sacred sites – route of pilgrimage to Wirikuta - have been jeopardized. This work explores the paradigmatic nexus between conservation and development, since pursuing economic development, Mexico has granted mining concessions within the Wixárika people´s traditional lands without respecting and protecting their right to selfdetermination, free, prior and informed consent and benefit-sharing. In this regard, this master´s thesis discusses the international and regional commitments of human rights that shall be taken into account with the aim to respect and protect indigenous peoples´ rights, mainly those related to the use and enjoyment of its property and indigenous peoples´ right to culture in relation to the environment.